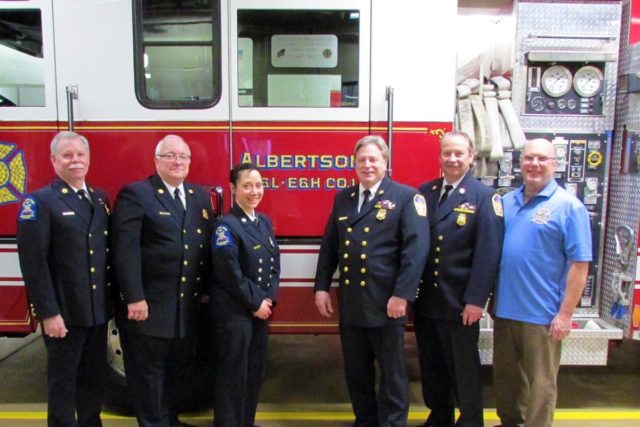 The Chiefs of the volunteer Albertson Fire Hook & Ladder, Engine & Hose Co. No. 1 are personally vested in maintaining an active and vibrant crew. They carry volunteer applications with them at all times and actively promote the fire company.

The past two years, over 25 people submitted applications equating to a 30 percent increase in potential new members. The dedication of the Chiefs Bill Clark, Joel Melamed, Jay Janowitz and Tim Farrell has been reflected in the retention. The fire company has a unique family dynamic and camaraderie and often all social events are attended by current active members and by our exempt fire company members.

The fire company has several welcoming street advertisements including the one in front of the firehouse. Every Sunday, they have the bay doors open and invite families to engage with the members and visit the fire trucks and rescue vehicles.

The younger members of the Albertson Fire Co. actively participate on a combined drill team with a nearby fire company. Through the use of social media, many of the members that are under the age of 30 will post work and social opportunities. This also helps to contribute to the retention of our junior probationary membership.

The fire company’s old-fashioned approach to recruitment includes local advertisements in the neighborhoods and one large electronic display in front of the firehouse in a high traffic area. They have face-to-face meet-and-greets, where they actively engage people at all community meetings, all house calls, parades and social outings.

There is a mentorship program, where Chiefs engage closely with recruits for the first six months as the rest of the membership assists with making them comfortable with their new role of probationary officer.

They provide free training that allows them to excel in areas of the fire and EMS service without having to pay for the training. Oftentimes, more than three members will attend classes for certification in various areas of fire prevention and rescue. The fact that some of the coursework counts toward college credit benefits many families.

There are social outings like baseball games at local stadiums, hockey, paintball and trap shooting. Approximately 30 members will attend each event, which has assisted in maintaining morale.

Firefighters are recognized for exemplary behavior at monthly meetings, where fundraisers and community events are planned among the membership.

The Albertson Slo-pokes Drill Team was re-established to build camaraderie. The Junior membership consists of senior high school and college students. Approximately 10 recent members that are in good standing have partnered with a second local fire company to join in the old fashion drill competitions on Long Island.

Several experienced members help mentor them in their skills as well as travel with the team for support. It has had a multitude of benefits like building friendships and improving retention of new members.

They partcipate in are numerous community events supporting the local boy and girl scouts as well as the local special needs school. Five times per year, the fire company will host an educational day for the students, and assist them with fire and rescue education. In the past, the company had also assisted in six Eagle Scout projects with successful outcomes. They encourage all members to attend these events so that the students are able to see diversity in the fire company membership.

Around the holidays, the fire company has adopted families in need to provide gifts and food. The membership and families both receive a tremendous amount of satisfaction from participation.

The success in the effort given by the fire company can be seen in several facets. They’ve increased membership by about 25 percent over the past two years. The retention of new members is greater than 80 percent.

In addition, 20 percent of younger members are involved with officer studies. These are members that have been active in the fire company for at least four years.

The members of Albertson Fire Hook & Ladder, Engine & Hose Co. No. 1 genuinely and humbly embrace their responsibilities to their community, friends and families. They are quick to put others first and foremost and take pride in all their endeavors.